Jian Deleon examines the long history between Bally’s rereleased Animals collection of sneakers and streetwear and the New Orleans hip-hop scene. Plus, discover the exclusive launch event for the Bally Animals.

Launched at The Orpheum Theatre in New Orleans on May 3rd 2018, the Bally Animals collection was the talk of the town. The event celebrated the revival of the iconic shoes, as well as the collection of accessories and ready-to-wear, which are available exclusively in the US. Attendees included Bally CEO Frederic de Narp, Benjamin Simmons, Swizz Beatz and DJ Dee-1, as well as a performance by Big Freedia.

The New Orleans hip-hop scene found its roots in the mid-1980s, around the time The Showboys released a track called 'Drag Rap' that floundered in New York but resonated with the South. Oft-sampled in later songs from New Orleans, its drum sequences and xylophones gave a modern context to the city's strong Mardi Gras Indian rhythms, which later evolved into the 'bounce' subgenre that characterised 1990s New Orleans hip-hop. Warren Mayes was the first NOLA rapper to make it big, getting signed to Atlantic Records in 1991.

Other notable names include Big Freedia, DJ Jubilee and Bust Down, who rapped 'Putcha Ballys On'. Then, of course, there was Master P with his No Limit Records crew, and Bryan 'Birdman' Williams' highly influential Cash Money record label, which propelled the careers of artists Kilo-G, BG, Turk, Juvenile and Lil Wayne. New Orleans' rap scene has progressed to the point that it has given New York's a run for its money, and continues to be a hotbed for some of the South’s most prodigious talent. But in the same way the musical style reinterpreted trends from the East, so did the style trends important to the culture.

In a warm climate, the East Coast's penchant for hard-wearing work boots and oversized puffers was eschewed for baggy jeans, breathable sportswear and plenty of sneakers. Elongated white T-shirts were a style staple, often accentuated with big logo belts, cotton headbands and baseball caps. Comfort was just as important then as it is now, and tracksuits evolved from their sleek 1980s incarnations to the slouchier fits of the 90s. 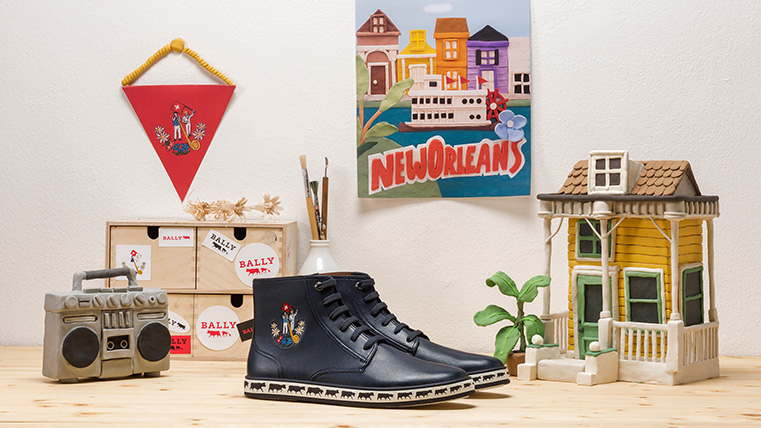 Of course, none of that mattered if what was on your feet brought the rest of the outfit down, and the Bally Animals sneakers were the epitome of aspirational footwear. According to Don Bartholomew, CEO of Louisiana's Bangn Records: 'They were the shoe you had to have. You had to have your Ballys.'

Like most things in hip-hop, the original Bally Animals collection found a second life outside of its original inspiration. Launched in 1991, the collection feted the 700-year anniversary of the Federation of Switzerland. The cows on the edges symbolise the traditional procession of cattle to the Alps, a custom that remains today. But thanks to its bold colours and recognisable patterns, it easily transformed into a shorthand status symbol for NOLA's style-conscious rap scene.

The new Bally Animals collection pays homage to that era with the same animal-detailed sole that made it covetable in the 1990s, available in the high-top Alpistar and the low-top Anistern.

NOLA hip-hop's penchant for cosy, luxurious style is exemplified in the Anibally pool slide, which, at the time, probably would have been worn with the matching socks. True to the 1990s spirit, the Bally Animals collection includes embroidered logo polos, track jackets and coordinating track pants – although the silhouettes have been updated for a more modern sensibility. And since no throwback look is complete without the right accessories, there are also cotton headbands, leather baseball caps, backpacks and Bally logo belts.

The Bally Animals collection is exclusively available in the US.